Connecting an Angular App to a REST API (Part 4)

In this article you’ll learn how to connect an Angular app to a REST API.

In the last part of the tutorial, we’ve learned how to build an Angular app using Docker. In this blog post, you’ll learn how to consume the REST API in Angular.

Overview of the Default Angular AppComponent

Firstly, let’s look at the existing code in the angular-app directory.

Components are simply TypeScript classes with an HTML template and optional CSS. They are used for sections of the UI, e.g. navigation bar, sidebar, etc.

Let’s quickly explain the files that were created by default in the angular-app directory:

Now that we have an overview of the existing Angular files, let’s build an Angular component in order to create a basic UI that allows the user to see a list of Todo items.

Navigate to the angular/angular-app directory and run from the terminal:

You’ll notice a new task-list directory was generated under angular-app/src/app. This directory contains the files for the TaskListComponent. Additionally, the component was automatically added to the declarations directive in src/app/app.module.ts.

In task-list.component.ts, there is an ngOnInit() method. This is a lifecycle hook that runs when a component is initialised.

Next, let’s check that the generated component works. We’ll need to reference the component using the selector found in task-list.component.ts, namely app-task-list.

Edit the src/app/app.component.html file and replace its contents with:

If you now go to http://localhost:4200/, you’ll see that the task-list works! message will be displayed. This is simply the default template found in task-list/task-list.component.html.

To get the code to this stage, run:

Generate an Angular Service to Call the API

In this section, we’ll proceed to generate an Angular service that will connect to the DRF REST API.

In Angular a service is a class that provides reusable functionality across components. Generally, a service is a Singleton, meaning they will “live” as long as our application lives.

In most cases, you can think of components to be concerned with pieces of the UI, whereas services can be delegated tasks by components. These tasks can include fetching data from a server, dealing with input validation, or logging app data.

Let’s create a new service for calling the API. From the angular-app directory, run the command:

The command will create the files api.service.ts and api.service.spec.ts in the angular-app/src/app directory. The first contains the service code, while the latter contains testing code.

For making HTTP requests in Angular, we’ll use the HTTPClient module. Import it and add it to the imports directive in app.module.ts:

Import and inject the HttpClient class in the service src/app/api.service.ts:

In TypeScript, we can use an interface for type-checking purposes. Basically, an interface just defines the properties of an object and their type. Let’s make a Task interface to define how a task object looks like.

GETting the Tasks from the API

Let’s retrieve the Todo tasks by making a GET request to the /api/task/ endpoint.

We’ll do this in three steps:

1. Create a method in the API service to query the endpoint

Edit src/app/api.service.ts and add the following:

Here, we can see that the getTasks() method returns an Observable, which we import from RxJS (Reactive Extensions for JavaScript).

Observables are a way of message passing in a publisher-subscriber model in an application. They are useful for processing asynchronous data streams, such as data received from calling an API.

Lastly, the Observable itself emits arrays of Task items, hence the typing Observable<Task[]>.

2. Call the Method from TaskListComponent

The $ at the end of tasks$ is a naming convention for Observables.

3. Display the Results in the Component Template

Next, we will display the tasks in the component template. Open src/app/task-list/task-list.component.html and add the code:

Using the async pipe, we can subscribe to an Observable and iterate over the array of values returned.

If you now access the app, you’ll see in the browser console that there’s an error related to the CORS (Cross-Origin Resource Sharing) policy. 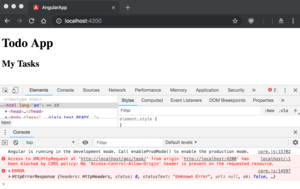 The problem is that the browser is only allowed to send/receive requests from http://localhost:4200, where we serve the Angular app. The browser blocks requests made to the Django DRF API, which is served on http://localhost:80, from the Docker container.

Fortunately, we can tell the browser to allow requests by employing the django-cors-headers package:

Here, I’ve also added localhost:8080 in case we make the request from the Angular app served by the Docker container instead of the ng serve one.

If you now visit http://localhost:4200, you’ll see the dummy Todo tasks being displayed: 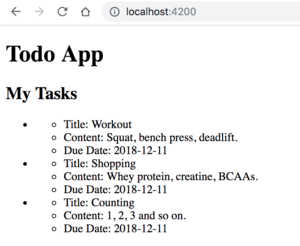 To get the code to this point of the tutorial, run:

In this part of the tutorial, we’ve learned how to connect our Angular app to our Django DRF REST API to retrieve the tasks from our Todo application. We’ve also been introduced to Angular components, services, and Observables.

In the next part, we’ll see how we can enhance our Angular app to handle creating and updating task items.